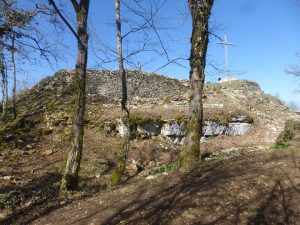 In 1305, in the Ain valley, war had been raging for more than twenty years. These lands, which were not yet part of the kingdom of France, were submitted to the ambitions of two important families: the counts of Savoy and the dauphins of Viennois. These two lineages had been fighting since mid-12th century. The count of Savoy, Amédée 5th (1285-1323), wished to secure the road crossing the Ain valley between Bugey and Bresse. He put his son, the future count Edouard, in charge of building a small castle. Built of wood and earth, the fortress was located on top of Mount Luisandre, in order to control the pass of Brey-de-Vent, on the road between Bresse and Bugey.

This same year of 1305, the dauphin Humbert 1st de la Tour-du-Pin (1282-1307) had a similar fortress built on the neighboring Mount of the Allymes. From then on, those two rival fortresses faced each other, less than one kilometer apart, as a crow flies. In 1312, both sides started to rebuild the castles of stone, but had to stop because of a truce. This truce, signed in 1314, stipulated that neither side was allowed to build any fortification of stone. But as soon as 1315, the construction started again on both sides. When the truce was broken, in 1318, two similar fortresses were in place, face to face: square courtyards with surrounding walls and two towers in the case of les Allymes, versus only one square tower nestled in a corner in Luisandre. 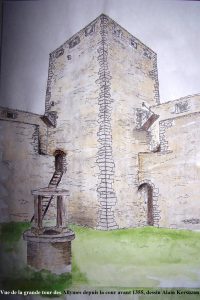 Despite the war going on, both sides built a fortified village beside the fortresses. The most remarkable vestige of these hamlets is the north wall of the Allymes, 90 meters long with a small round tower at the end.

The two foes continued to look each other up and down for almost 20 years, but the Dauphinois situation was made more precarious by the loss of Saint-Germain (the fortress which controlled the Albarine valley) in 1321. Savoyard attacks resulted in the first destruction of the fortified village of the Allymes by fire in 1321. In 1334, another attack, more important, left the castellan and his brother dead. This same year, the Chappareillan treaty was signed, and the following year the château des Allymes was exchanged for the château de Saint-Martin-du-Frêne.

Therefore, the château des Allymes passed under the jurisdiction of the Savoyard castle of Saint Germain. The war calmed down for a while, but came back to full intensity in 1352, when Lord Hugues of Geneva, a strong ally to the Dauphiné, caused much damage to the château des Allymes. However, the more than two centuries

long conflict finally ended in 1355, and the Paris treaty was signed. By this treaty the king of France, new master of the Dauphiné, agreed with Count of Savoy Amédée 6th on new borders, delimited by the Rhone and the Guiers rivers. The château des Allymes lost its strategical interest and had changed hands just a little while before. The fortress of Luisandre, however, was more affected by this change and was no longer maintained. It was even signaled to be ruined as soon as the next century.

Open from Wednesday to Sunday from 1:30 pm to 6:00 pm during the winter holidays (A zone).

A 10 minutes’ walk is needed to reach the castle from the car park.

In winter, the castle can exceptionnaly be closed during the official opening hours owing to heavy snowfall, please check our Facebook page to make sure that the site is open.