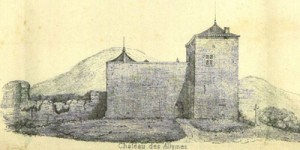 In the early 20th century, the chateau des Allymes seems to have been abandonned. Most of the main lodging house was ruined, and is thought to have been destroyed around 1830, but the remaining part was consolidated. Twenty years later, Adolphe de Tricaud (1797-1872), a rich owner, inherited the castle and started restoration works around 1850. The present shape of the castle dates back to this time, as he was the one to install the roofs on top of the wall-walks and the towers.

The only new buildings were a barn on the south side and an oven, now ruined. De Tricaud set up a few furnished rooms in a medieval style, but didn’t live in the castle. Instead, a family of farmers occupied the place.

The Tricaud family kept the ownership until 1959, when a antiquarian bought the castle. In 1960, an association was created in order to restore it, and open it to the public. In 1984, the buying of the castle by the town council of Ambérieu-en-Bugey permitted to continue the restoration works initiated in the 1960’s. Nowadays, the castle is still owned by the town council and is open to the public by the association des Amis du château des Allymes et de René de Lucinge. The present restoration works will last four years, and are mostly financed by public authorities, patronage, and visitors’ donations.

Open from Wednesday to Sunday from 1:30 pm to 6:00 pm during the winter holidays (A zone).

A 10 minutes’ walk is needed to reach the castle from the car park.

In winter, the castle can exceptionnaly be closed during the official opening hours owing to heavy snowfall, please check our Facebook page to make sure that the site is open.